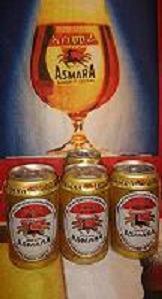 Asmara Brewery started to diversify its line of production to include Beer in 1942. In due course, Beer production started to become its main line of activity. To that effect, its production facilities were progressively expanded and modernized. As a result, at the date of its nationalization in 1975, it was already one of the leading plants of its kind.

Beer is an alcoholic drink made usually from water and cereal grains, usually malted barley or other cereal adjuncts.

Barley grain is steeped in water, partially germinated and then gently dried on a melt-kiln in order to develop active enzymes, which convert starches in malted barley and other cereal grains into sugar that can easily be fermented by yeast dur-ing the fermentation process. In Asmara Brewery the above process is carried out in a conventional type maltery with capacity of 2,000 metric tons per annum.

First the grains are cracked in a mill and mixed with water in a mash to extract readily soluble materials and to gelatinize the starches and therby making them more susceptible to extraction and enzymatic breakdown into dextrines and sugar. For the purpose specially designed vessels (Ziemann/Huppmann Mash Tuns) are used. The overall process is known as mashing. The mash is pumped to a Ziemann's Lautertun or Meura mash filter 2001 to separate the liquid fraction called wort. The wort is pumped to a Ziemann brew kettle, where hops are added and boiled for about 2 hours. The resins and essential oils of the hop contribute to the bitter flavor and pleasant aroma of the beer.

After the brewing, the solids are removed, in a Whirpool (Meura) and the wort is cooled down to - 10°C in a wort cooler (Alfa-Laval). The cooled wort is inoculated by means of saccharmyces yeast (bottom yeast) and pumped to close Fermentation tanks. During the process the wort is aerated to ensure the oxygen content needed to start the fermentation.

Fermentation takes place at temperatures ranging approximately 4° to 130C, depending on the strain of yeast and the brewing method. Main fermentation is completed within 3-4 days or more than a week, depending on type of beer produced. During the process, most of the wort extract is fermented to alcohol and carbon dioxide. The PH decreases to approximately 4 and the brew forms a foamy head, and its shape and colour changes as the process progresses. When the extract is decreased to approx 4%, the brew is transferred to the cellar (Meura). After main fermentation, the beer is called 'green' beer; it has a high content of undesired products. In the storage cellars, it is cooled down to approx 2-30C for maturation (also known as storage or Lagering). The young or "green" beer is stored in these tanks for several weeks, at a decreased temperature of approximately -2°C.

Asmara Brewery produces lager and stout beers. Lager beers are aged beer of German origin, taking their name from the German lagern or to store. They are bottom fermented and stored at low temperature. They have medium hot flavor and alcohol content of 3-5 percent by volume. Stout beers are top fermented with strongly hopped flavor then lager beers and alcohol content ranging from 4-6.5 percent or more by volume. After maturation, the beer passes through Kieselguhr filter for fine filtration, and then to the Bright beer Tank. Here the beer is carbonated to ensure a level of approximately 0.5% of carbon dioxide by weight in the product.

Finally the beer is filled in kegs steamed with hot water (and is known as draught beer) into returnable steini glass bottles of 0.33 litres using crones Mecafill filler under pressure of carbon dioxide to prevent foaming and picking up of air. To prevent growth of microorganism in the bottled beer, it is pasteurised in the bottles using Sander Hansen Tunnel pasteurizer at approx 62°C for several minutes.